Yannick Noah had plenty of victories as a professional tennis player. I'm sure he cheered for his son Joakim Noah in the NBA. Despite having a number one single on the French Charts and several number one albums in France I don't think he thought of outdoing Stevie Wonder.

However in my Battle of the Bands 101 Yannick beat Stevie 7 votes to 2.

I will be back with a new battle on March 1st stay tuned!

Peter Tork passed away today. He best known as being a founder, keyboardist and bass player in The Monkees. Here are a couple of songs from The Monkees prime years..

The news from CBS..

Here he is with James Lee Stanley..

An episode of the show..

He will be missed by his family and friends

Today apparently it is National Battery Day. Keeping with that theme the topic for Monday's Music Moves Me is songs featuring Smoke, Alarm, Battery and Charge.

This song will probably be used a lot but it is a good one.

Deep Purple "Smoke on the Water"

I think my choices will wake you up. On a serious note it is important to test the batteries in smoke detectors from time to time. No one wants to sing this song about their home.

Talking Heads "Burning Down the House"

Musician Kofi Burbridge has passed away at the age of 57. He was a member of the Aquarium Rescue Unit, The Derek Trucks Band and the Tedeschi Trucks Band. He also appeared with The Allman Brothers and Dead and Company. His brother Oteil was the bass player for the last two groups.

Here he guests with the Allman Brothers at Wanee in 2011.

"Page and time" by the Aquarium Rescue Unit

The Grammy Award winning musician known for his flute playing, keyboard talents and backing vocals will be missed by his bands, musicians, fans, friends and family.
Posted by Mike at 12:50 PM No comments:

Battle of the Bands 101: Redemption Song

It is hard to believe I haven't used a Bob Marley song in my Battles of the Band. It kind of fits that  I would celebrate an African musician on one post and move onto a Reggae giant in the next. Black History Month International Music version if you will.

The song I am choosing is Bob Marley's Redemption Song. This ne is just for reference and your enjoyment.

Yannick or Stevie you decide who wins with your votes in the comments. Both artists provide covers that are different from the original and different from each other. I'll count of the votes and post a winner in a week or so. Thanks for visiting and come back soon!

I just learned this week that Oliver Mtukudzi passed away last month. I found at when Bonnie Raitt mentioned it when I saw her in concert opening up for James Taylor. You are probably saying who is Oliver Mtukudzi. Per Wikipedia "he was considered to have been Zimbabwe's most renowned and recognized cultural icon of all time." I know of him and was able to see him perform thanks to Bonnie Raitt.

Oliver wrote the beautiful song "Hear Me Lord" which Bonnie Raitt recorded on her Silver Lining release. The first time I saw Bonnie was at the New Orleans Jazz and Heritage Festival (Jazzfest) shortly after that album was released. Anyway she brought him on stage something like this...

Not all of his songs are in English nor should they be.

Here he is with Ladysmith Black Mambazo "Hello My Baby"

Battle of the Bands 100 Result: Fun for me, Fun for you

Hopefully my 100th Battle of the Band was as fun for you as it was for me. Sometimes these battles are about exploring music, a theme, a tribute, or mixing things up. This time around it was the best reason for a Battle. That reason is simply a song I like from a band I like. Then add two great artists and you have a darn good recipe.

Bob Weir on the contest 5 to 3. He would be happy with the results. Bob still performs the song with his various side projects.

Here  he is performing it in October with the Wolf Brothers...

"Only A River" a song from his latest solo album..

I hope you enjoyed and I will be back with a new battle in a few days!

In 1975 the Cleveland Indians named Frank Robinson as a player/manager making him the first black manager in Major League Baseball. He went on to manage the San Francisco Giants, Baltimore Orioles, Montreal Expos and Washington Nationals.

Baseball wise he had a Hall of Fame career. He still ranks 10th in career home runs. He is the only player to win the MVP Award in both leagues. Frank was on two World Series winning teams. Mr. Robinson also won the triple crown. He ended his career with a .294 batting average and 2943 hits.

Here is a collection of highlights when he played for the Cincinnati Reds..


Below is his Hall of Fame induction speech...


He will be missed by baseball, his fans, friends and family. May he rest in peace.
Posted by Mike at 6:51 PM No comments:

Jim Dunlop might not be a household name. However you ever heard Jimi Hendrix use his Crybaby Wah pedal you can thank Jim Dunlop.

If you played a guitar or other string instrument requiring a pick you have probably used one of his picks.

The company makes guitar electronics, capos, picks and strings. The products endorsed by a who's who of musicians including Sash, Alice and Chains, ZZ Top, Dave Matthews, and Joe Bonamassa to new just a handful. Jim was an innovator and creator of things that made musicians better.

A quick interview with him..


His legacy lives on in the company he founded. He will be missed by his fans, friends and family.
Posted by Mike at 10:20 AM No comments:

Lindsey Vonn Calling it a Career

Lindsey Vonn the greatest American woman skier is calling it career. One could make a case for her being the top woman skier of all time. Only one other female skier has won the overall World Cup Championship four times. Vonn's 20 World Cup titles is more than any other skier has won. The most by a man is 19.

The Olympics might be her weakest spot on her ski resume.  Two bronze medals and a lonely gold one. That Gold one was in the downhill and was the first won by an American woman.

Injuries are the reason she is retiring.

She has had a great career. The United States has some wonderful woman ski racers but Linsey's boots will be hard to fill.

Congrats to the New England Patriots

Been out of town for a bit so starting to post about things that have happened this month. The Super Bowl happened Sunday night. I  caught the fourth quarter f the game at a pool side bar.

Highlights from the game..

The Patriots didn't have a dominant season. They put in another gear for the playoff and Tom Brady will get his sixth ring.

You can hate him all you want. However, in the clutch Tom Brady is the best in my opinion. In this game credit needs to go the defense holding a potent offense to just three points. In the fourth quarter it was not Tom throwing the pick or missing the late field goal. The Rams didn't help themselves and the Patroits beat them.

Battle of the Bands 100: Easy to Slip

This is Battle of the Bands 100 for me so I thought it should be special for me and hopefully for my audience. It is no secret I l like Little Feat. I didn't get to see the band when Lowell George was around. Interviewing Little Feat's co-founder Bill Payne was amazing and then to meet him in person was pretty darn cool. 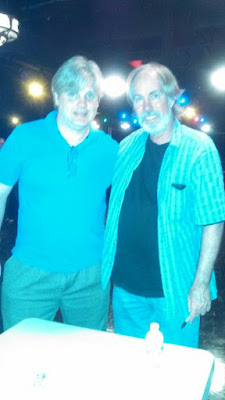 
Two contestants who found fame in interesting groups. One from Fairport Convention and one from the Grateful Dead. Vote for the one you like best in the comments. I will count the votes and announce the winner in a week or so.