Last week was so much fun! I'm back for more. 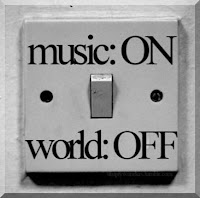 I'm stealing the above switch, because sometimes it is so true. Sometimes you just have to turn the switch on.

Today's theme is songs with male names. I'm not going to try to get them all. I will highlight a few and encourage you to visit the other participants for more.

"Uncle John's Band" The Grateful Dead. So many from that band to use Tennessee Jed, Casey Jones, St. Stephen to name a few...

Stay tunes for tomorrow's Battle of the Bands post for more music!
Posted by Mike at 10:49 PM

You shared a number of songs I did not stumble across in my mewsic search, especially those by Led Zeppelin. I don't think I've heard any of these before no. "Roland the Headless Thompson Gunner" by Warren Zevon although the song title and artist did not ring familiar, I believe I've heard the song somewhere along the way not today, though. I hope you'll join Roy, Steve, Robert, James and me on the dance floor when you get a minute! Thanks for boogieing with the 4M gals!

Way ta go, my friend! You have rocked the house for sure! Lovin' all these numbers you've chosen and some I haven't heard for years, but luvin' dancin' to them again! Woo Hoo. Gotta say my favorite one is Paul McCartney, Uncle Albert! I haven't heard that in ages! LUv it! Oh and definitely HAPPY DAYS, "Weezer", with Buddy Holly! bwahahahaha That was too much fun! Thanks for the boogie woogie!!! You dance divinely!!!! hahahaha HAVE A ROCKIN' WEEK!

Great to see you here in the blog hop! You picked some great tunes for the theme. Dead, Zep, Hendrix... my day has been made. Thank you!

Great collection, Mike! Even the one by The Dead is a good one, and I'm hardly a fan, let alone a Dead Head.

You added some to the list that I hadn't seen yet. Did anyone come up with "My Boy Bill" from the musical Carousel?

Arlee Bird
Tossing It Out

Hey Mike! I didn't know you were part of the 4M gang! Good to see you here. I'm late making the rounds, both here and with the BOTB posts but I'm getting there...
GREAT songs you picked for this theme. A bunch that I hadn't heard in years or even thought of. The two Led Zeppelin picks are awesome! And the Warren Zevon song: perfect! I think I put Hey Joe on my overall playlist... such a great musician there.

I'm skipping this coming Monday's 4M because I'm so far behind on so many things but I'll be around the following week. If you did a battle on the 15th, I'll get to that either today or tomorrow...

This is quite a selection! Thank you for sharing.

I just noticed this was an old post... don't matter none though great tunes are great tunes my friend! Yes, you've certainly rocked the house. Thanks for stopping by. BIG HUGS AND if ever you want to know what our theme is just look in my side bar. YOU ROCK!

I love all of your selections so, so much! I'm a huge fan of everyone you featured.

Nice choices, I haven't heard The Grateful Dead in years.