Robert Hunter the legendary lyricist best know for his songs written for the Grateful Dead passed away today. He wrote lyrics for others as well including Jerry Garcia, Bruce Hornsby, Little Feat, Bill Payne, David Nelson, Jim Lauderdale,  and even collaborated with Bob Dylan. he has also written several books of poetry.


Robert's version of "Box of Rain"

I interviewed Bill Payne one of the founders of Little Feat on songwriting with Robert Hunter:

"If Robert doesn’t like something he is going to tell me. If lyrically he sends me something I can’t sing then I need to see if we can do something a little differently. Then he goes, ‘BOOM! – try this!” It’s usually not only better but a lot better."

Here is a song they wrote together "Ragtop Down"

He wrote "Cyclone" for Bruce Hornsby


Hunter is a member of the Songwriters Hall of Fame, Americana Music Awards presented him a lifetime achievement award,  but his legacy is in the words of so many songs.

I don't expect his name to be a household name. Fame and talent don't always equate. Then again, it is the talented musicians you see at the clubs and the festivals a lot more than the super stars. Yonrico Scott was this kind of musician.

Yonrico behind the drum kit with The Royal Southern Brotherhood. (Photo by me)

"Could Get Dangerous" with The Royal Southern Brotherhood, the song features a solid drum solo...

He won a Grammy along with this band..

That was the Derek Trucks Band.

Here is a solo song from his solo debut album...

Fitting picture of an empty kit..

He will be missed by his family, musicians he played with, friends and fans may he rest in peace.

Ric Ocasek passed away on September 15 at the age of 75.  Ric was a founding member of the Cars.

"Just What I Needed"

A solo song "Emotion in Motion"

Another solo song "Something to Grab For"

"Drive" by The Cars

May he rest in peace

Today's theme for Monday's Music Moves Me is artists/bands that have performed at Farm Aid. The festival started in September of 1985 and this year's festival is on September 21, 2019. If you want more information on the charity, festival and how you can help visit their site.

Dave Matthews Band "Crash Into Me" from Farm Aid 1997

Neil Young "Heart of Gold" from the first one

Hope you enjoy and I will see you soon!

Battle of the Bands: For Money

After hearing Eddie Money had  passed away Sammy Hagar wished "every cover band to play an Eddie Money song tonight." These songs were recorded before his death but I did find a couple of covers. The song is "Take Me Home Tonight." If you want more Eddie Money check out this post here.

Eddie Money "Take Me Home Tonight" live from the Hollywood Casino and Races in Charles Town, WV December 2012. Not the very best recording, but somewhere in that crowd yours truly was lurking.


This one will sound better...


Enough about the song lets start the battle!

Contender One:  Jump Off


Now it is your turn! Tell me who you liked the best Jump Off or Every Avenue in the comments. I will count up the votes and announce a winner in a week or so!

Labels: Battle of the Bands, Eddie Money, Every Avenue, Jump Off, tribute

Eddie Money passed away yesterday at the age of 70 due to cancer.

Eddie Money had a string of hits in the 70s and 80s. His songs can be heard on classic rock radio stations in frequent rotation.

He will be missed. May he rest in peace.

Battle of the Bands: Solomon Burke with a Unanimous Decision

Unanimous decision is a fancy way of writing shut out. Solomon Burke silenced the Rage Against the Machine. All my voters woke up early and were too hungover for the Rage! 2 of the 3 statements above can be verified.

Sometimes big contrasts work and sometimes they don't. Close battle or shutout I am still left pondering over what my next battle will be.

"Everybody Needs Somebody to Love"

Stay tuned a new battle on the 15th!


Today's  Monday's Music Moves Me is a freebie and since tomorrow is World Suicide Prevention Day I thought I would use that as a theme. It is one of those things people don't talk about but maybe through music we can have a conversation. Sometimes it is a kind word that pulls someone from the edge, sometimes it is professional help, and sometimes it is too late. 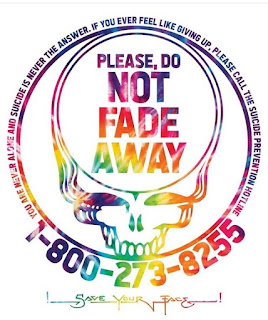 Let's start with Curt Kobain from Nirvana..."Smells Like Teen Spirit"


Chester Bennington of Linkin Park.. "In The End"


Richard Manuel of The Band..."The Shape I'm In"


The inspiration for me wanting to write a blog post on this subject comes from the passing of a talented guitarist, Neal Casal who passed away  on August 26 after playing one of the biggest music festivls in North America the LOCKN Festival in Virginia. Neal was a member of Ryan Adam's band The Cardinals, Chris Robinson Brotherhood, Hard Working Americans, and Circles Around the Sun. He had played with Bob Weir, Willie Nelson, Sheryl Crow, Tift Merritt, Robert Randolph, and many more.

Nel with his song "Maybe California"...

L is for Lazy

A is for Autumn Leaves

B is for Boulevard of Broken Dreams

Green Day taking us down another road!

O is for Oh Well!

R is for Radio Waves

Roger Waters of Pink Floyd fame with a solo song.

D is for Dream Weaver

Gary Wright taking us on a journey.

A is for Aeroplane

Y is for Yesterday!

Tomorrow when you go back to work you will long for Yesterday! Ending with The Beatles is never a bad thing. I hope you enjoyed and will see you soon!

Keeping in the Spirit of Labor Day I chose the Bob Dylan song "Maggie's Farm." Of course where this a Bob song there is always a few covers. I am going to lift my glass this weekend and I'm not going to work on "Maggie's Farm."

All right I mix it up with a couple of covers and you let me know which one you like the best in the comments.

Contender Two: Rage Against The Machine

Quite different takes of Bob's song! Let me know which one you like best. Enjoy the Holiday I'll drink one for you!