The Grinch Made Me Late: BOTB Results

The Grinch didn't really make me late with Battle of the Bands results. As blogger I just had other things to blog about that were important to me. Which is better than the alternative of having nothing to blog about. I was going to blog the results last night but after a late dinner I didn't even turn on the computer. Anyway I apologize for being late. 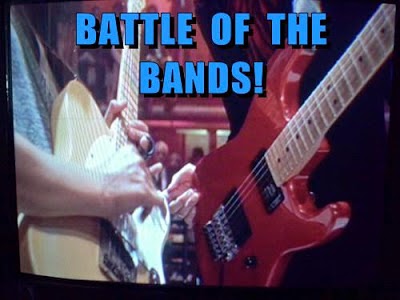 The majority of the voters thought Jim Carey should stick to comedy and acting and leave the singing to professionals like Straight No Chaser. The final tally was 12-3.

More from Straight No Chaser...

"All About that Bass"

Here is a fun version of "You Lost that Loving Feeling"..

Just one week until the next Battle of the Bands. I hope to see you soon with a new post!

Seriously, Mike, that last video got me - what fun!!! Even though I voted "Straight, No Chaser," I did watch "The Grinch" on the day of your battle. Ha! I refuse to grow up completely.

I saw it coming, good buddy. Seems a lot of people agree that Jim Carrey became overexposed in recent years and his over-the-top singing style is annoying. Thanks for introducing me to the sound of Straight, No Chaser. Their stuff goes down easy and puts a smile on my face!

Straight no chaser is awesome! I have a coworker that sees them in concert every time they come to Dallas. They had a special on TV recently on public television raising money and selling tickets.

I want them to sing to me! Send them to my house, please. I've never been a Jim Carey fan. I loved In Living Color, except for Jim Carey.

No worries about being late. I'm usually a tad late with my results as well. Throw in December and I think just about everyone has something going on that's going to make them a bit tardy. Personally, I'm trying to get back to writing my WB series. Looking forward to your next BOTB.